COWABUNGA!
A morphenomenal crossover series featuring two different sets of teenagers with attitude is coming soon from BOOM! Studios in partnership with IDW. 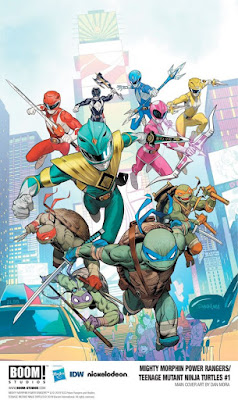 Longtime fans will remember that the Turtles have crossed paths with the Power Rangers before in Episode 4 of Power Rangers in Space titled “Shell Shocked”. We’re excited to see these two multi-colored, monster fighting teens team up again!

Just imagine all of the techno-babble Billy and Donny will have, Zack teaching Mikey Hip-Hop Kito... there's so many cool scenarios that can take place and we're geeking out just thinking about it.

We're obviously going to get a fight sequence between the two teams. The Turtles totally look like they came out of Finster's Monster-Matic and the Rangers can be mistaken for upgraded soldiers of the Foot-Clan. This fight needs to happen.

The Turtles have crossed over with Batman in the past leading into an animated feature that was released back in March. Nickelodeon airs both Rise of the Teenage Mutant Ninja Turtles and Power Rangers Beast Morphers. Does this mean that there's a possibility of an Animated Feature based on this upcoming comic series? We sure hope so!

This 5-issue mini-series is being written by Ryan Parrot, Illustrated by Simone di Meo and will hit shelves starting Wednesday, December 4, 2019 so hope into your Party Wagon or zord of choice and head to your nearest Comic Book Shop and add this to your pull list!
at July 15, 2019